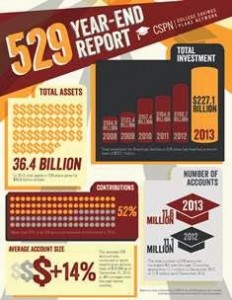 “From the average age of a beneficiary to preferred contribution practices, this survey provides a unique glimpse into the average 529 investor,” said Hon. Michael L. Fitzgerald, Chair of the College Savings Plans Network and State Treasurer of Iowa.

“CSPN is always looking for new findings to help American families save for college and this survey is a helpful tool in understanding the patterns and trends of 529 plan investors.”

Saving Habits: Investors believe their 529 savings will cover a percentage of college education. According to the findings, 39 percent of investors believe their 529 plan will cover 25-50 percent of a college education; 28 percent believe it will cover 50-75 percent and 17 percent believe it will cover 75-100 percent. In regard to saving techniques, 529 plan investors also save in other ways: 59 percent of respondents save via a traditional savings account and 40 percent invest in a mutual fund. When asked how they contribute to a 529 plan, the majority (71 percent) of investors said they make single contributions while 39 percent have automatic contributions.

Word of Mouth: With many vehicles to spread the word about 529 plans, investors discovered 529 plans mainly through friends and family (31 percent), advertising (29 percent) and news articles (24 percent).

Featured Benefits: Ranked in order of most importance, investors believed tax-free growth was the top feature of 529 plans (78 percent), followed by the ability to segregate savings specifically for higher education (57 percent) and the ease of use of 529 plans (41 percent).

Methodology: The national survey was completed by 4,470 individuals identified as 529 plan savers via Survey Monkey from Aug. 5 to Oct. 16, 2013.

About the Author:
CSPN is a national non-profit association and the leading objective source of information about Section 529 College Savings Plans and Prepaid Tuition Plans—popular, convenient and tax-advantaged ways to save for college. An affiliate of the National Association of State Treasurers (NAST), CSPN brings together administrators of 529 savings and prepaid plans from across the country, as well as their private sector partners, to offer convenient tools and objective, unbiased information to help families make informed decisions about saving for college.