Use your four-leaf clover for more than luck 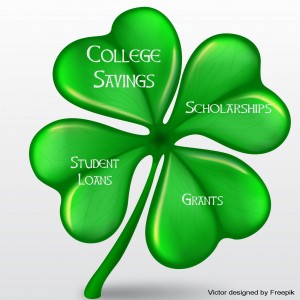 Every parent hopes their child will receive a combination of scholarships or grants. While these are great to aim for, they should not be considered a sole funding source. For example, there are only about 138,000 Division I and Division II athletic scholarships, according to the U.S. News and World Report. Realistically, a student may receive a few scholarships and/or grants, but very few of these will cover the entire cost of a four-year bachelor’s degree.

The third leaf on the clover, student loans, comes with an added cost – loan repayment. Federal student loan rates vary from 4 to near 7 percent, while private lenders often offer higher rates, with an industry average of 9 to 12 percent. Financial aid in the form of loans does help in the immediate, but it ultimately makes higher education even more expensive than the current price. These loans often discourage former students from buying a car, home or even having children because their debt takes decades to pay off.

The importance of saving for college becomes even more apparent as students look beyond a two- or four-year degree. I recently attended an event and spoke with a young man who was completing his senior year of pharmacy school. He was preparing to graduate with over $180,000 in debt – for pharmacy school alone. This was echoed by a law school graduate who said loans for his Juris Doctorate were upwards of $200,000. These examples remind me how imperative it is to save as much as you can while a child is young. Continued education is much more affordable knowing that fewer loans were taken out for those initial degrees.

Parents and students shouldn’t let these numbers alarm them. The best part of a 529 college savings vehicle is that anyone can open an account – for a child, friend, spouse or even themselves. While mom and dad may have devoted their 529 savings to their daughter’s bachelor’s degree, she can choose to open her own 529 account for future use in graduate school or beyond. By saving regularly and making smart investment choices, the student can help finance the next step in her education.

The four-leaf clover approach to college affordability reminds us that saving even a little today will have a big impact on tomorrow. By combining college savings with scholarships, grants and student loans, higher education is that much more realistic.

Don’t leave your college planning to luck, but do take advantage of that four-leaf clover; with it, college (and beyond) has never been more accessible!

About the author: Michael L. Fitzgerald is the State Treasurer of Iowa.