Steps to the Future and the Role of College Savings

It seems like just yesterday that I was dropping off my son for his very first day of school — pre-school. It was just after 9/11/01 and our community, our city, our world had been terribly shaken in an unimaginable way. Despite it all, the steps he and I took hand-in-hand through the pretty wrought iron gate and into the serene garden and entryway of his precious Grace Church School, gave me a tremendous sense of peace and optimism. Although my office building no longer stood and so much was uncertain, my little boy had a place to be and was embarking on something wonderful and new. This meant the world to me. The establishment of a routine and rhythm, through this first stage of formal schooling, helped our family resume a sense of normalcy when things otherwise seemed upside down. It was our first opportunity to take a small step forward at a time when we otherwise felt frozen and unclear about the future. Thankfully, I was able to see beyond the visual reminder of what had just occurred, and to savor the beginning of Ben’s educational journey. I will always treasure my memories of his very first first day of school. 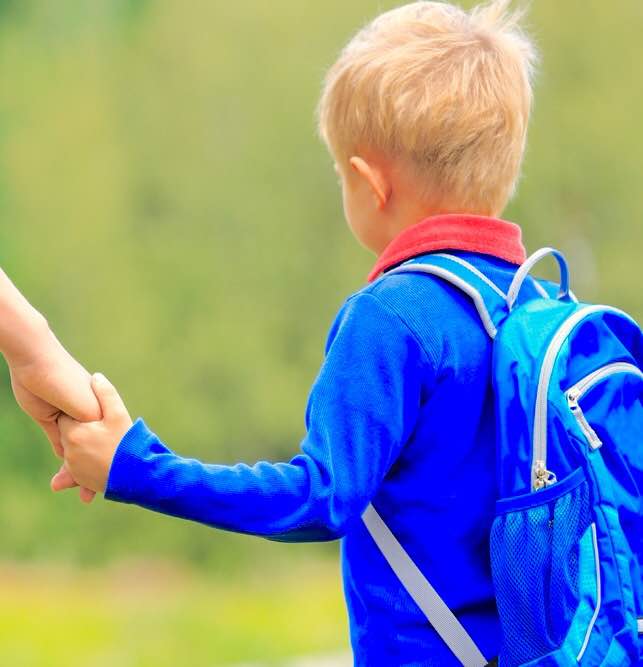 Fast-forward 15 years and in just a few days, Ben will be heading on his own to his very last first day of school – high school. Senior year will have begun as will the whirlwind of college applications, essays, tours and interviews. It’s certain to be a year unlike any other. Looking back, the physical steps that were taken in Septembers gone by — not only in 2001 into preschool but subsequently, into lower, middle and high school — were among countless types of steps taken over days, weeks, months and years to prepare us for where we find ourselves today.

One of the most practical steps taken was the establishment and funding of a 529 college savings account. We couldn’t have predicted how quickly time would fly or what path Ben would want to pursue, but we knew we wanted him to have the opportunity to attend college when the time came and preferably, without having to borrow a lot to do so. In retrospect, we are grateful for having taken the valuable step of beginning to save on a regular basis for what seemed so very far away at the time.

Fifteen years later, it is abundantly clear to me that the foundation that had begun to be built at that otherwise shaky time in September 2001 is now rock solid. All that has been learned, developed and experienced socially, emotionally, academically and otherwise has come together beautifully. In what feels like a blink of an eye, my pre-schooler is now a candidate for college.

Through all the years, regardless of world events and other changes that occurred in our lives, having an established plan helped keep us on track. We stayed the course and kept our eye on the future, and as a result are relieved to be prepared for whatever next steps Ben takes.

About the Author
Patricia Roberts has been involved in nearly every aspect of the college savings arena for more than 16 years as an attorney, product manager, state relationship manager, passionate advocate, public speaker and as a mom, saving for her son Benjamin’s post-secondary education. She is chair of the College Savings Plans Network Corporate Affiliates and also plays an active role on other committees including Media Relations, Federal Initiatives and Legal and State Affairs.