An astronaut. A train engineer. A banker.

These are the kinds of professions that call for higher education, which can also lead to a substantial student loan debt.

Michelle Chartrand, mom to five young boys, is well aware of the costs that come with a college education, and she knows her boys – ages 6, 4, 3, 2 and 1 – are dreamers with big ideas. So, if one of them wants to go to college to study astrophysics, there’s a 529 College Savings Plan waiting for them. 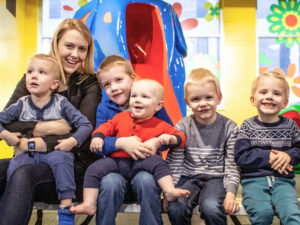 “You can ask my kids any day of the week what they want to be, and that could change daily. Right now, we’re very into space and astronauts, rocket launches. I also have a little budding engineer,” she says.

“They are at an age where there’s lots of curiosity, lots of questions about what I do for a living, what my husband does for a living. They’re really truly starting to understand work and what that means, and the path that you have to take to get to work is that you go to college and you study something.

“What’s great about our kids is that not only are they curious, they’re also very into careers. And so, working at a children’s museum, I get to see them emulating careers, whether it be a fireman or a police officer or a basketball player. You truly get to see what that curiosity is and what they gravitate toward.”

Begin saving early, whether it’s a little or a lot

Shortly after their oldest son, Stephen, was born, Michelle and her husband, Ed, opened a 529 college savings plan for him. Michelle had been fortunate that her parents had saved for her college education, but she was still very much aware of the stress that can come with student loan debt. Ed had attended medical school, and the couple has just recently finished paying off his student loans.

“It’s difficult to stay ahead of it (medical school loan payments) sometimes. Student loans for medical school can be especially steep, but it’s a good feeling because paying off those loans allowed us to free up that opportunity to put money away for our own kids,” says Michelle.

Having a large family and putting money away for their kids’ college education has always been a top priority for the Chartrands. Even with five kids under the age of seven – Stephen, 6, Cooper, 4, Nolan, 3, Michael, 2, and Henry, 1 – it was important to start saving early.

“It’s easy to think that you have plenty of time to save when your kids are young, but in all actuality, now is the time that we needed to start saving. Me being able to come out of college debt free was extremely important, and it helped me get on my feet.

“But we’ve seen my husband, with his loans for medical school, and how that can really impact you financially. And so that’s really given us the opportunity, and it’s really pushed us to open 529 plans for our own kids because it’s never too early to start saving for them. That time will be here before we know it.”

Michelle says she learned about the 529 program through her local children’s museum where she is the chief advancement officer.

“One of the things that we’re really big on here at the Children’s Museum is hope and curiosity and learning through play,” she says. “One of the valuable things about working in a children’s museum is you get to partner with great organizations in the community. So, I first became aware of the 529 plan through working here at the museum. We partnered with the 529 plan to create exhibits around hope and learning.”

Hope, of course, is one of the optimistic outcomes of a 529 plan. With 44 million borrowers collectively owing $1.5 trillion in student loan debt, investing in a college savings program is one way to help control growing debt. With student debt now the second-highest consumer debt category – behind only mortgage debt, and higher than both credit card and auto loan debt – one could argue that it is more important than ever to invest in a college savings plan so that the children of today can avoid being overwhelmed by student loan debt as many millennials, their parents and their parent’s parents have experienced.

Easy to understand, easy to set up

There are many benefits to opening a 529 college savings plan, and tax incentives are among the most popular. Money in your 529 plan grows tax-free, and it can be withdrawn tax-free when used for qualified expenses, such as college tuition, room and board fees or textbooks.*

“That’s an excellent thing about the plan – the tax benefits of it, and then the fact that, not only there are tax benefits, but that it’s a transferrable account. If one of our sons gets a scholarship, we can transfer the account to one of his brothers. The flexibility is really what sold us on the 529 plan,” Michelle says.*

Another reason the 529 College Savings Plan is so popular is that it was designed to be a user-friendly program that is easy to open and maintain. You also can open a 529 plan with a modest initial investment. Some states allow an account to be opened with a minimum of $10, and some states don’t require any initial investment amount in order to create an account.

“You can set up payments, you can add as you go. There’s a lot of flexibility in that, and so it’s really worked with us in our finances to be able to open a plan like that because it’s accommodating to families,” says Michelle.

“My kids love nothing more than to get a big fat $10 bill or $5 bill or whatever for their birthdays. And that’s wonderful, because they can learn about saving; they can put it into their account. And then what we do on the back end is we go online and make that contribution through our accounts.

“Our kids understand that they’re saving for something and saving for their future. We’ve always told them that college is something that you need to save for. You don’t just get to go for free. So, they have put two and two together when they get money from grandparents or money from aunts and uncles – that money is being saved for their future.”

“I’m not the most financially savvy person, so what was really helpful for me was working with the folks that run the 529 plan. They were able to share a lot of information that helped us make the right decisions on what to invest, how to invest, how much to invest at certain times. We really got helpful information and I felt like we had the peace of mind knowing that we were putting our money into the best possible place at the right possible time,” Michelle says.

“If you’re not financially savvy it can be very daunting to save and to make sure that you’re using your money wisely and allocating it wisely.”

The expense of college can also be daunting, whether it’s a two-year, four-year, specialty school or other post-graduate school.

“College is expensive, and what’s great about the 529 plan is that in the simplest form, you can put in as much or as little as you want. Whether that’s $5, $10, it’s $100 one month, $500 the next, it’s very flexible and it works with families of all income levels, which is good,” Michelle says.

“It’s not something that you have to have a lot of money to invest in. It’s literally for everyone (with college-bound children). And that’s the nice thing about it.

“Ultimately, we just really want to give our kids the opportunity to know that they have their future ahead of them, and that they can go to college and hopefully get out of college debt free.”

The 29-state alliance involves 48 partners including state treasurers, higher education agencies, financial service firms and other state officials. The public-private partnership was formed on the basis of increasing awareness of 529s.