The Right Place at the Right Time

By Alexandra Smith
Program Officer for the College Savings Plans of Nevada and the Gov. Guinn Millennium Scholarship Program
November 30, 2015

Flashback to early 2013: I had recently moved to a new state and was looking for a job that I hoped would become a career. When I was hired to work on with the Nevada’s college savings plans, I anxiously showed up not really knowing what to expect, but thrilled that I’d be working to help prevent something I knew a lot about—the hefty cost of college. As a recent college graduate, I knew all too well how expensive an education could be and what it felt like to be in debt from it. What I didn’t know is exactly how many resources were out there to help plan for and pay for college until I started learning. 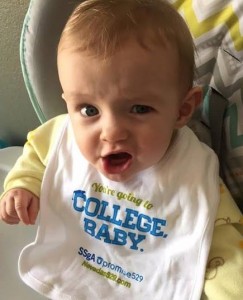 As I got more comfortable in my new position, I was at an event talking to families who knew little to nothing about the benefits of a 529 college savings account and it finally hit me. I realized in that moment how truly fortunate I was to have landed the job I did at this time in my life. At the time, I was a mother to one young daughter, and now I have two: ages 1 and nearly 4. Not only did this job change my life—it effectively has changed both of my daughter’s lives as well. If I had not been immersed into the world of 529s and all of their options and possibilities, I would have been like most parents out there. I would have been focusing on which daycare was right; soccer or dance; private school or public? At what point would I have stopped and thought about their future college plans? And at what point would I have finally taken action on that thought?

I know that if I am being honest with myself, it would have been one of those things I said, “I have plenty of time. They are still in diapers after all.” I would have put it off claiming other expenses or simply having enough “time left” as a reason not to start. I will forever be grateful for the opportunities I discovered through my work in the 529 community, not only for myself, but also on behalf of my two future college graduates.

Alexandra Smith is the Program Officer for the College Savings Plans of Nevada and the Gov. Guinn Millennium Scholarship Program. Since starting in May of 2013, Alexandra has worked to help launch the Nevada College Kick Start program which is the first and largest statewide, universal, opt-out children’s development account program in the country.