Bipartisan consensus is an aim rarely sought or achieved in Washington these days, but in 2015, college savings programs offered a rare opportunity for compromise. 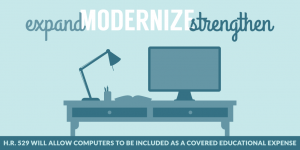 To recap last month’s update from College Savings Plans Network Chairman and State Treasurer of Alabama Young Boozer:
• Computers and associated equipment are now qualified education expenses;
• Refunds from post-secondary institutions resulting from a student’s withdrawal can be re-deposited into his/her 529 account within 60 days, free from taxes and penalties; and
• A burdensome distribution aggregation requirement was removed.

It might be easy to forget over a year later, but the sudden urgency with which these provisions moved through Congress was brought on by President Obama’s State of the Union proposal to tax 529 earnings to fund an expansive community college initiative – an idea that threatened to undermine the college savings community’s ongoing efforts to increase the growing amount of lower-income 529 plan participants.

Enter H.R. 529, which cleared the House in February by an astounding margin of 401-20 and quickly started weaving through the Senate as S. 335 before being included in the aforementioned PATH Act. Passed by nearly three-quarters of representatives and two-thirds of senators, it was signed into law by the President before everyone left D.C. for Christmas.

What’s the takeaway? There are a few to be sure, but first and foremost, this legislation was the product of years of efforts by CSPN members and affiliates. Whether industry veterans or newcomers whose own educations were paid for by 529 funds, state plan administrators generated critical contacts with legislators looking to secure a win for their constituents back home.

Second, the CSPN Federal Initiatives Committee tailored its efforts to respond to a meandering legislative process. After H.R. 529 passed the House, key members received thanks for their support during a March visit to the Capitol. As S. 335 was introduced, state officials encouraged their own senators to lend their names as co-sponsors. Amidst the transition from Speaker Boehner to Speaker Ryan, another visit to Washington in November kept the issue firmly on the radar – with a specific request for the content of H.R. 529 to be included in the year-end tax package!

Moving forward, testimony from students and account owners utilizing 529 plan accounts to reach their educational goals in an affordable manner will be vital to achieving further legislative gains. CSPN members from state programs and their corporate partners will endeavor, both individually and collectively, to improve federal treatment of 529s.

As the past year of advocacy on H.R. 529 showed, there’s a willing, receptive audience in Congress.

Troy Montigney is Executive Director of the Indiana Education Savings Authority (IESA), working to grow participation and investment in the state’s tax-advantaged CollegeChoice 529 Savings Plans beyond their current 300,000 accounts and $3.1 billion in assets under management. He also serves as co-chair of the College Savings Plans Network (CSPN) Federal Initiatives committee and is a member of the Indiana Commission for Higher Education’s 21st Century Scholars Advisory Council.