A while back, I wrote a book for youngsters called Rock, Brock, and the Savings Shock. The premise was about twin brothers with wildly divergent personalities, especially when it came to the challenge put forth by their grandpa one day: For ten straight weeks, he’d give them each a dollar for small jobs they did. If they saved that dollar, he’d match what they’d saved, every week. 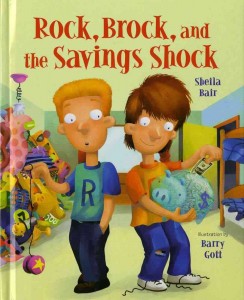 Brock stashed every buck, compounding his savings with his grandpa’s match each week and ending up with $512. His brother spent every dollar he earned on frivolous junk and ended up with zip.

My idea with the book was not only to educate kids about the concept of savings, interest, and compound interest, but also just to illustrate the basic ethos of saving versus spending. It’s a tough sell in our instant-gratification, consumer-driven economy, especially for young people who are typically more focused on the excitement of the here-and-now, rather than the essential (but boringly adult) long view.

It’s also this fundamental ethos that’s largely behind a new program we’ve just launched at Washington College where I’ve been president for a year now—the Saver’s Scholarship. Part of a series of initiatives that are aimed at lowering student debt and making college more accessible to all students, regardless of financial or socio-economic background, the Saver’s Scholarship is directed specifically to families and students who are using money from a 529 or Education Savings Account to help pay for tuition.

For every dollar those families use from those funds, Washington College will match it, up to $2,500 annually (yep, in this case, we’re grandpa). Qualification for the Saver’s Scholarship begins in academic year 2016-17, and the first scholarships will be credited to the students’ financial aid awards in 2017-18. To receive the Saver’s Scholarship, students must maintain continuous fulltime enrollment and use funds from a 529 or ESA plan that has been established at least three years before enrollment. The College will match the previous year’s contribution, up to $2,500. Students who qualify for the Saver’s Scholarship can still pursue other types of scholarship aid, both from Washington College and elsewhere.

We’re pretty sure nobody else has tried something like this. It’s a pilot program, and we’re not sure how many families will participate; that’s something we’ll be watching. Estimates of participation in 529s vary; a 2012 report from the Government Accounting Office found that less than 3 percent of families were investing in 529s, while a 2016 Sallie Mae estimate says 16 percent are using them.

We hope the Saver’s Scholarship will encourage more people to learn about 529s and ESAs as the widely available and beneficial savings vehicles for college that they are, especially given the tax benefits. We know that the more people who can save for college, the less debt students and families will have to assume to achieve a college education. And that’s good for everybody.

We know that some families don’t have the extra income to set aside, and we’re working to help them through our other programs. But for those that do, we want to say—as would our founding patron, George Washington, Huzzah!

About the author: Sheila Bair is president of Washington College in Chestertown, Maryland and the author of Rock, Brock, and the Savings Shock.