Banish College Savings? No, Encourage Them!

As the father of two elementary-school children, I understand the financial pressures on young families. The need to save for college is only one of those pressures.

But as president of a 529 plan, I am dismayed by recent articles such as, here and here, suggesting that parents should not save for college. Boiling down their arguments, they are essentially saying college is too expensive to save for.

That turns the situation upside down. We should save precisely because college is expensive, just like we save for what we value that we can’t simply write a check. President John F. Kennedy declared five decades ago that Americans do things like go to the moon “not because they are easy, but because they are hard.” Acquiring a college degree is not easy and neither is saving and paying for one.

A college degree is a tremendous asset for any young adult. Few doubt that the knowledge and skills developed in post-secondary education can set the stage for a higher quality of life, in terms of economics and lifestyle. As with most assets, those who benefit from having them are expected to help pay for them. 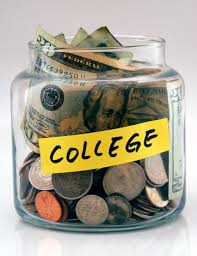 It’s common to cite the statistic from  a Georgetown study and other research that college graduates earn an average of $1 million more in their lifetimes than those without degrees. And it’s not just the money. College graduates tend to smoke less, volunteer more, and live longer than those who stopped schooling after high school graduation.

As a parent, I try to set good examples for my children. We discuss saving for things that are important to them, college included. I want them to value what is important to them, and that means doing their part to achieve them. By saving, the message we send our children or grandchildren is that we believe in them. An Institute for Higher Education research project bears this out. Children from low-income families with even $1 to $499 saved for college are three times more likely to attend college and four times more likely to graduate than those with no savings.

My chief takeaway from this research was that it involved lower- and middle-income families, not the wealthy. Even though only modest amounts of money were saved, it dramatically increased the success rates.

Paying for college has traditionally followed the model of a three-legged stool. There is funding from students’ families, educational institutions, and government. Over time, more responsibility has clearly shifted to families. That sharp increase in student loan debt to $1.5 trillion shows families are meeting that responsibility with loans, rather than savings. That’s a costly decision. Going into debt makes education more expensive. Here are two ways of paying a $35,000 tuition bill. A family can save $100 a month for 18 years — assuming 5 percent interest — and reach that target. It will cost $21,600. Conversely, borrowing $35,000 at 4.5 percent would require paying back more than $43,000 over 10 years. Which is a better financial path?

It’s a lesson American families are absorbing. According to the annual Sallie Mae report, How America Saves for College, more parents are saving. In 2018, 57 percent said they are saving for their children’s higher education, compared with 50 percent five years earlier.

Whether taxpayers will ever take on the task of providing some form of “free college” for everyone or almost everyone, I can’t say. That will be the subject of a lot of debates over the coming years. But I’m not going to use “wait and hope” as a college strategy for my children. I’m going to save as much as I can as often as I can.