Total Assets and Investment Increase for First Half of 2015

LEXINGTON, Ky. (September 15, 2015) – Investment in college savings continued to grow during the first half of 2015, according to mid-year data released today by the College Savings Plans Network (CSPN), the nation’s leading objective source about Section 529 College Savings and Prepaid Tuition Plans. During the first six months of the year, total assets and number of open accounts reached $258.2 billion and 12.33 million, respectively. The mid-year review analyzes activity from all 529 plans in the country, including 107 savings and prepaid tuition plans.

Highlights of the 529 Mid-Year Report: 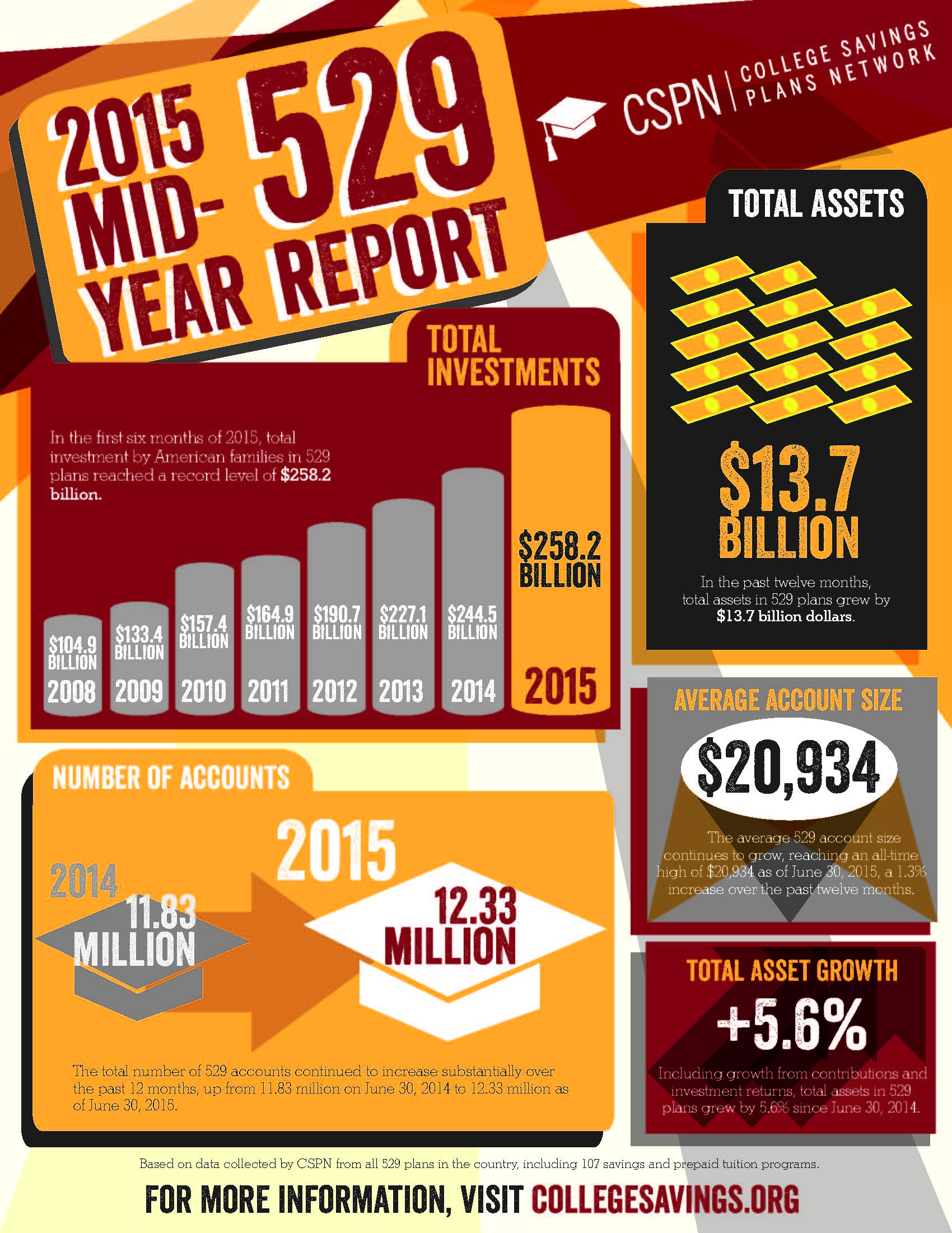 “From total investments and assets to account size and contributions, year-over-year we’re seeing a steady and sustained increase in overall growth of 529 plans. The pace of growth is a positive sign that Americans recognize the value of investing in college savings,” said Betty Lochner, Chair, College Savings Plans Network. “Ultimately, we would like the personal finance model of higher education to switch from debt-driven to savings-driven. By making wise college savings investment decisions and regular contributions to their accounts, American families will help their children grow and prosper.”

529 plans are one of the most compelling ways for families of all income levels to plan ahead, save for college, and reduce their reliance on student loans. Currently, 49 states and the District of Columbia offer 529 plans. CSPN collects data biannually to examine 529 plan assets, contributions and distributions.

A full copy of the report is available for download here. For more information on the CSPN 2015 mid-year 529 Report, plus resources and tools families can use to make informed decisions about saving for college, visit CollegeSavings.org.

Founded in 1991, the College Savings Plans Network (CSPN) is a national non-profit association and the leading objective source of information about Section 529 College Savings Plans and Prepaid Tuition Plans—popular, convenient and tax-advantaged ways to save for college. An affiliate of the National Association of State Treasurers (NAST), CSPN brings together administrators of 529 savings and prepaid plans from across the country, as well as their private sector partners, to offer convenient tools and objective, unbiased information to help families make informed decisions about saving for college. For more information, visit the CSPN website at CollegeSavings.org; and follow CSPN on Twitter and Facebook.